When most people go to work, they aren’t thinking about the dangers of their job. They can go into work with ease, do their job without worry, and not even question that they might not return home safely. That is, unless, they work in a job that has obvious hazards, like construction. In these cases, the company likely does extensive training in order to keep its employees as safe as possible. It makes sense for precautions to be taken for dangerous jobs, but what about jobs that don’t appear dangerous?

People working in seemingly non-dangerous jobs unfortunately aren’t free from dangers. For example, working in retail can be dangerous. It often involves periods of solo working, such as trips to the stock room and tidying up the dressing rooms. Particularly at early or late hours of the day, and in small businesses, there may only be one employee present in the whole store. This introduces potential danger into the job, as employees are vulnerable when working alone. They could trip over a box in the stock room, fall and break a leg, without the ability to get to a phone or reach another person to call for help. Or, someone volatile could walk into the store right before closing.

Awareness of safety issues related to people who work alone, whether it be in retail, home healthcare, or construction, is improving. And with it, there has been an increase of products and solutions directly addressing lone workers: cell phone apps, store cameras, panic buttons, and wearables all aim to decrease risk for workers. The SoloProtect ID is one such wearable that helps lone workers on the job. Among other capabilities, it can connect the user to the appropriate emergency services when the Red Alert button is pressed. An employee using the ID may feel much safer when they work, but do they know what the actual process is if they press the Red Alert? 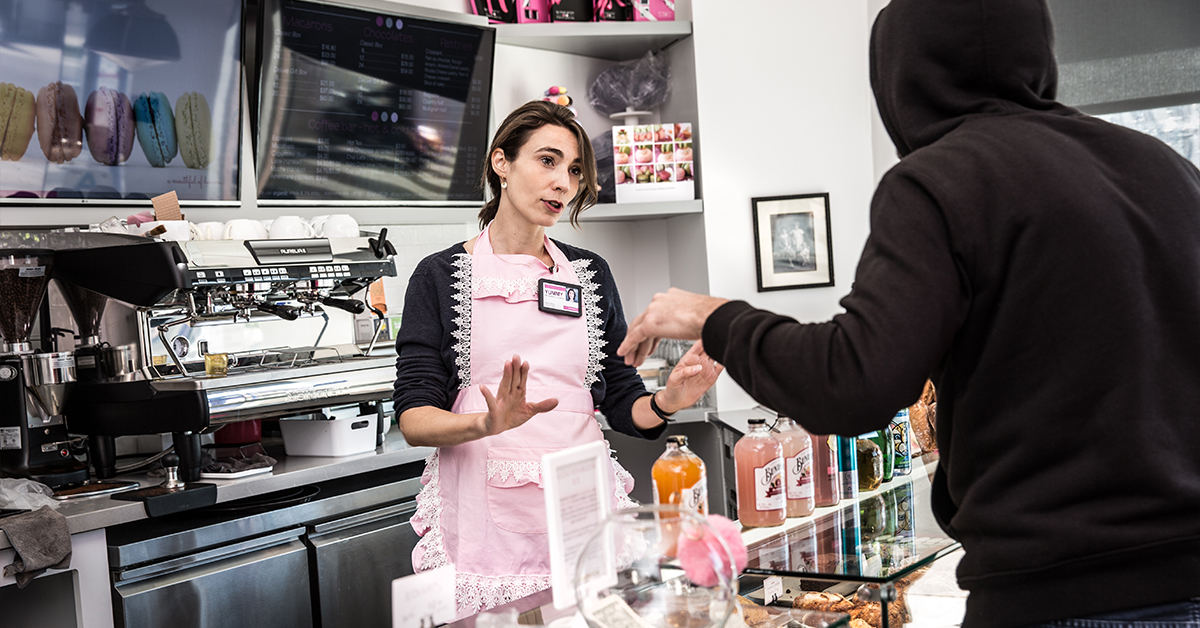 Let’s pull back the curtain and show exactly what happens when a lone worker faces danger and calls for help:

Juliette is a manager at a local bakery. She had just finished a long day of work and was about to close the store. The last customer just left, and she started preparing for closing. While signing off the computer behind the desk, she turned her back to the storefront and heard someone come in. Though she was tired, she of course welcomed this customer to take a quick look around before closing. But, instead of looking around, the customer walked straight up to Juliette and started yelling at her. Juliette was caught off guard and felt nervous since no one else was around. The customer began banging on the counter and continued to yell, at which point Juliette placed her hand on her SoloProtect ID and pressed the Red Alert button on the back of the device. The person continued to verbally attack Juliette and began to move around the counter toward her. As Juliette tried to calm the customer down, she also moved around the counter in order to protect herself from a physical assault. To her great relief, within a few minutes, flashing red and blue lights appeared outside. Two police officers walked right in and confronted the dangerous person as they tried to flee. Juliette was incredibly shaken but relieved, and she returned home safely.

In the time from when Juliette pressed the Red Alert button to the time the police arrived, unseen and unheard people were working quickly and carefully to keep her safe. When she pressed the Red Alert button, an audio connection opened up between her and the SoloProtect Monitoring Center, allowing a highly trained operator, Ben, to listen into Juliette’s situation without the aggressor knowing. Hearing the severity of the aggressor, Ben decided to immediately escalate the response and dispatch the police to her through GNSS geolocation, providing them with the situation details he obtained through his audio connection with Juliette. Ben continued to monitor the situation while the police were arriving. Once they arrived and Ben knew Juliette was safe, he closed out the call and the event audio was stored on SoloProtect servers should it be needed in the future for review or use in court.

Most jobs have some degree of danger involved, but it’s important to keep raising awareness particularly for jobs that may not obviously need extra safety precautions. Continuing to protect lone workers through devices such as the SoloProtect ID is an important step for ensuring the right to a safe work environment.